Build and maintain a custom WordPress powered site with integrations to SalesForce, TrustPilot and LMS. Oversee migration from old hosting to new infrastructure on AWS.

I worked with with the founders of Monarch Institute on a previous project and was given the opportunity to develop the first, second and most recent iterations of the monarch.edu.au website.

Below is an example of the site design around 2014. 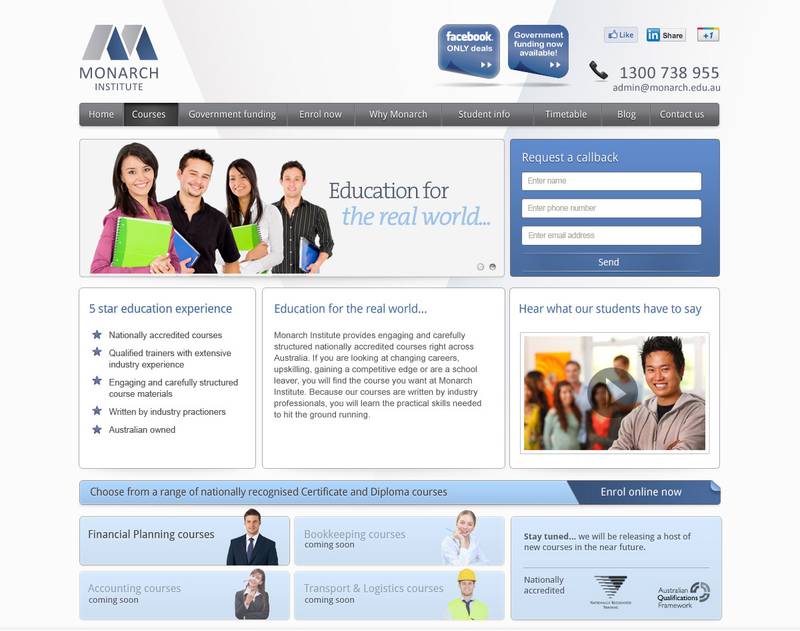 I built the original site back in 2012, and continued to work with Monarch Institute all the way up until my departure for Singapore at the end of 2019, at which point I handed over the site development and maintenance.

Originally, the business wanted a simple site to showcase the various online courses they offered, as well as a way for prospective students to get in touch. As the business grew, the site required more dynamic content and CRM integration. Later, a migration to AWS was also necessary to bring the site up to speed and improve performance.

WordPress has always been a bit of a sore topic for many developers, myself included, but what was undeniable, especially back in 2012, is that it provided a very simple platform for developers and users to get beautiful, functional, and fast sites up and running.

WordPress was chosen by the client as they had experience with it and needed something they could continue to update and maintain themselves.

I had worked with WordPress already on a number of projects from my time consulting and freelancing, so I was comfortable building custom themes and plugins where required.

Various technologies were incorporated into the build, including:

I had the pleasure of working with Monarch from 2012 to 2019, and through that period of time we revamped the site multiple times, each time increasing the performance and functionality of the site - which was a goal for the company as it tried to increase it's rankings.

I used Cypress.io for automated front-end testing and the site was migrated to EC2 with RDS Aurora for the DB and DNS via Route53, all deployed via GIT.

The latest build, combined with migration to AWS saw a significant increase in the performance and speed of the site, which then resulted in an increase in the sites Google PageSpeed Insights score.